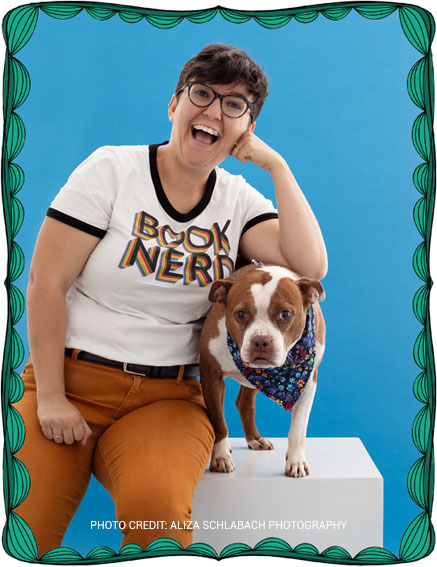 Gina Loveless isn’t very good at writing about herself in third person, but oof — here we go!

Gina Loveless writes for nine year olds to fourty-nine year olds.  For kids, she’s the author of the three book, middle grade series Diary of a 5th Grade Outlaw (Epic! Originals/ Andrews McMeel), the first book in the graphic novel series Animal Rescue Friends (Epic! Originals/ Andrews McMeel,), and the first of its kind humorous health and wellness book Puberty Is Gross, but Also Really Awesome (Rodale Kids). Puberty received a starred review by School Library Journal, and was one of their “Best Of Children’s Nonfiction” books for 2021.

For adults, she writes profiles and pieces on mental health for Men’s Health, has written a personal essay for Catapult, and she was a freelance researcher and fact-checker for MH and Women’s Health magazine for five years. She earned her BA in English from Duquesne University and then her MFA in Creative Writing from California Institute of the Arts.

Gina is also an aspiring screenwriter. Her mission as an author and writer is to help all the “weird” people of the world feel less alone and to destigmatize the conversation around mental health and mental illness.

Last, but not least, Gina is proudly represented by Alec Shane at Writers House.

When she’s not writing or reading, Gina can be found boogying at concerts with her husband, tending to their awesome produce garden, or snuggling with her rescue dog Gerdie. (But Gerdie would tell you, “Dat’s out of order. I’m first in Momma’s heart.”)